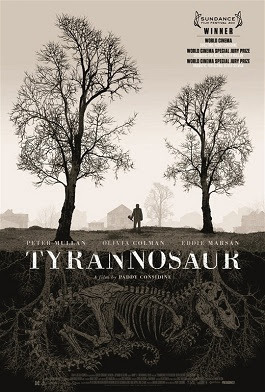 Tyrannosaur is arguably a social realist depiction of contrasting stereotypes. The narrative is powerful and intriguing – it removes rose tinted glasses from the different shades of society.

Joseph (Peter Mullen) is an unemployed man who is overruled by his own anger and and volatile temperament, he lives on a council estate where he bears witness to a child being bullied by his own parents and forms a loving friendship with Hannah (Olivia Colman), a Christian woman who runs the local charity shop.

Hannah is married to a man with a well paid job, she works in a charity shop and appears to have the perfect life at the beginning of the film – as the film progresses, we see past the happy wedding photograph and see a woman in a desperate state – abused by her husband she puts on a brave face daily and endures personal hardship (in contrast to the financial hardship that Joseph faces).

As the film progresses, a strong bond is felt between the individuals – without giving away too much of the narrative, we see a relationship blossom through the twists and turns of the lives of both characters, both singularly and as a ‘couple’.

The story is powerful - the concept of the narrative is carried by talented actors who make the film feel real. Arguably, the audience is made to feel compassion towards characters that in reality would perhaps not have our compassion. With a gripping story that could so easily be applied to individuals in wider society rather than identifying differences between social classes, it sets out to identify the similarities and in essence celebrates the similarities thus bridging the gap between working class and middle class people.

Tyrannosaur could be perceived as a romanticised dystopia – like Ken Loach, Paddy Considine has represented a version of reality in an artistic manner. From an outsider looking in, the audience is encapsulated in a powerful wave of on-screen emotion – a hybrid of redemption, violence and social realism tied up with a bow of elegance.

If you enjoy drama, give Tyrannosaur a try – it will leave you wanting more.